Holiday foods that can harm your dog

Thanksgiving, Christmas, and Hanukkah are all holidays associated with strong food traditions. We like to stuff things: turkeys, geese, stockings, even ourselves. This happy time for people is a dangerous time for dogs. Not because families regularly include the local taxidermist in their holiday plans; rather, many favorite holiday foods are just as tempting to your dog as to your guests. 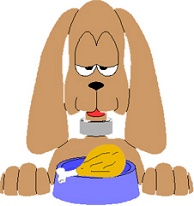 Scavengers by nature, dogs will eat anything. Truly. Anything. We once had one dog who ate half a roll of fiberglass insulation; another consumed half a bag of fire ant bait. Although neither item is likely to be a feature of your holiday meal, other traditional foods can sicken â€“ even kill your pet. A few precautions can save a lot of heartache.

1. Return of the "Bumpus Hounds" or, get that dog away from the turkey!
Turkeys aren't the only animals in danger on Thanksgiving. Anyone who's seen the 1983 movie, A Christmas Story, certainly remembers the classic scene where the neighbor's pack of "mangy hound dogs" sneaks into the kitchen and devours the half-cooked turkey. Although the movie is fictional, the situation isn't.

Choking: Dogs don't chew their food well under the best of circumstances (think of the phrase "wolf it down," for example). But, when presented with turkey and all the trimmings, they eat even faster. Dogs can easily choke on bones, whole potatoes, and other foods.

Punctures: Bird bones are hollow and they splinter easily, so dogs don't take the time to chew them very well â€“ if at all. The splintered bones can become lodged in the esophagus, stomach, or tear the intestines. Often, the symptoms don't even show for several days, and by that time the animal is seriously ill.

Pancreatitis: Too much rich, fatty food (like turkey skin, gravy, and stuffing) can cause vomiting and gastric distress. Worse, the dog may be stricken with pancreatitis, a dangerous medical condition that can become a chronic problem. The pancreas produces enzymes that help digest foods, but if the pancreas produces too many enzymes, they begin to attack the surrounding tissues. 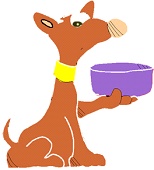 Symptoms include vomiting, lethargy, weakness, loss of appetite, and bloody diarrhea. It's easy to mistake some for minor upset or overlook them entirely if you're dealing with a houseful of guests and busy schedule. But, left untreated, pancreatitis can kill some animals.

The "trimmings" that accompany the turkey may cause problems as well. Cranberry sauce, candied sweet potatoes, and rich desserts pose problems. Surprisingly, so does dressing and stuffing. Many recipes include onions, which can damage red blood cells. Dogs (and cats) may become anemic after eating too many onions. Garlic has a similar effect.

2. Keep Spot Safe and Sober
Even though your dog is unlikely to steal your car keys and take a joyride, letting Fido drink alcohol is still a bad idea. Most animals won't drink alcohol by itself, but holiday drinks like eggnog mix it with familiar flavors and smells.

As with humans, body weight plays an important role in how alcohol affects an animal. A large dog may not show any ill effects, while the same amount can send a small dog into a coma. A drunken dog may seem cute and funny particularly to a group of humans in the same state of intoxication, but it won't be funny when the dog throws up or becomes seriously ill from his little binge.

Surprisingly, water can be as dangerous as alcohol to some animals. Dogs and cats are used to drinking from bowls on the floor. They don't see a difference between water used to keep the cut Christmas tree fresh and their own water bowls. The tree water may contain pesticide and fertilizer residue that can poison your pet â€“ or even a thirsty human toddler who might crawl by!

3. Nobody Can Eat Just One! Why dogs and chocolate don't mix.
Ok, so a tiny bite of chocolate candy won't make your dog sick but the 1-pound special holiday bag probably will. It takes two to three regular-sized candy bars to poison a 10-pound dog, but only 2.6 ounces of semi-sweet chocolate.

Chocolate contains a stimulant called theobromine. It affects the heart, central nervous system, and can be lethal to small animals. Symptoms of theobromine poisoning include excessive panting, hyperactivity, vomiting, and an increased heart rate. Severe cases can lead to uncontrollable muscle tremors and coma.

There's no way to know how much chocolate is too much for your dog: that depends on the dog's age, size, and general state of health. This is a case where "just a little bit" really is too much. Chocolate tastes good, and that one-time treat could turn your dog into a roving chocoholic.

4. Bread should rise in your oven not in your dog.

For most of us, eating bread dough sounds about as appetizing as snacking on the raw turkey. But not to dogs: they'll happily consume either one. Surprisingly, the dough can be as dangerous as the bird.

When yeast dough rises, it expands to many times its original size. It can do that on a sunny windowsill, in a warm oven, or in a dog's stomach. Yes, a dog's body heat can cause the dough to expand enough to warrant an emergency trip to the vet.

"Take the case of the Labrador retriever who ingested several rolls that his pet parent had placed on the oven to rise.

"The dog's stomach was so severely distended that the only option at the time was to surgically remove the dough; he was also treated for alcohol toxicosis, caused by fermentation of the dough."

If you notice that your bread dough is missing, it's time to find the dog. Symptoms include abdominal pain, bloating, and vomiting. It sounds funny, but bloating is actually a very serious problem that can kill your animal.

5. Cleaning the plate as opposed to eating it.
Happy sigh: you've put away all the food, loaded the dishwasher, and filled up the garbage pail. Don't relax quite yet. As soon as you sit down in the den, Fido and Tabby get up and amble into the kitchen to see what's what. The remains we call "garbage," they call a "midnight snack."

Dogs have been known to consume aluminum foil, metal skewers, turkey roasting bags, paper plates, and virtually anything else that has food â€“ or even the smell of food - clinging to it. Any of these can cause intestinal blockage, internal bleeding, and other serious illnesses. Be sure your garbage is securely fastened and out of the reach of your pets. 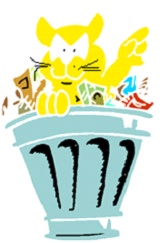 A Quick Word About Cats

If you also have cats, simply dog-proofing your dinner doesn't fully protect your pets. Although dogs will eat you out of house and home, cats seem to concentrate on actually eating your home.

In fact, this is one area where cats compete with dogs for the "Who Can Eat the Stupidest Thing" prize. Cats have been known to eat tinsel off the Christmas tree, ribbons off packages, and chew through electrical cords. Some snow globes contain antifreeze, which cats love to drink even though it's very toxic to their systems. Many plants are also poisonous to cats including mistletoe.

Just remember: as much as we love the holidays, they can be stressful for our animal companions. They have to deal with busy families who may not have time to give them enough attention, strangers in the house, changes in routine, and lots of unfamiliar foods. This stress can make them even more vulnerable to stomach problems and exacerbate existing medical conditions.

During the time of year when we count our blessings, remember that our pets count on us to keep them safe and feed them carefully.

Get Even, Give Fruitcake