My Grandmother's Recipe for Delicious Bread and Butter Pickles

All Recipes, Apppetizers
by alexine 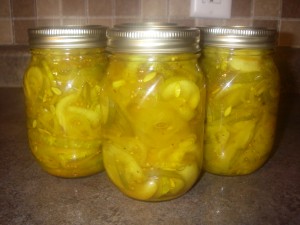 Every year my grandmother would give me these delicious bread and butter pickles. Since we moved this past spring I was unable to get any from her so I decided to ask for her recipe and try it myself.

This recipe is a really great way to use up the last bunch of cucumbers from your garden or a bag from the farmer's market. Either way the cucumbers are wax free which is necessary to make the pickles.

I hope you enjoy making and eating these bread and butter pickles as much as I do!

So the origination of this recipe comes from a book my grandmother has used for quite some time. It is titled; Guide to Home Canning and Freezing by the Ball Corporation. Since she put her specifics together for me, I've decided to share this delicious recipe with you.

Jarring is not something I had ever done until this experience so don't feel bad if you are in the same boat! All you need are the pint jars with the lids, a large pot with a lid and some old hand towels or pot holders. I'll explain this is more detail later. First we should get the basics down of what you need and where to start.

You will need the following ingredients:

You will also need the following kitchen items:

To begin making the pickles wash and thinly slice the four pounds of cucumbers and two pounds of onions. If you have a slider grater with a slicing attachment it will go faster but using a knife works just as well. 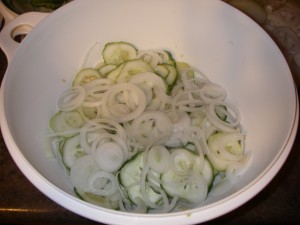 Once you are finished slicing layer the large mixing bowl with cucumbers, onions and then sprinkle kosher salt and repeat until you run out. Then pour the ice on top and the rest of the salt and let sit for about 90 minutes. This is how the pickles get crisp. 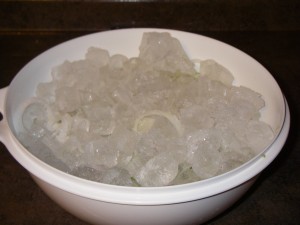 Once the 90 minutes are up put the cucumbers and onions in the colander to rinse off the salt. Try and get most of the water drained off so you don't add it to the pot later. 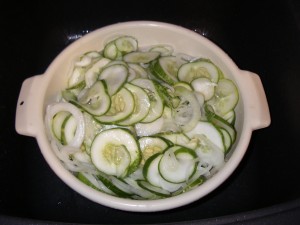 **This is when you should start the dishwasher with your jars in it if you have one or start soaking your jars in really hot water in the sink (not the lids). The method behind the madness deals with putting the boiling hot cucumbers and onions in cold jars isn't a good idea. The glass can break and hurt you!

Next combine the vinegar, sugar and spices in the large pot and put the disks of your lids in the small pot with water. Put both pots on medium heat and bring to a boil.

Once your vinegar broth is boiling add the cucumbers and onions and stir. Bring back to a boil. (You will notice the color of the cucumbers changing to a lighter green color.) Once they have boiled for about 2 minutes (or turned lighter green) shut off the heat and get your jars out to be filled. 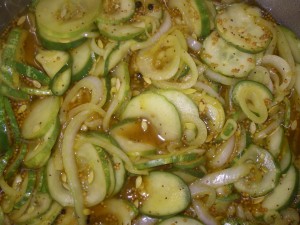 Use tongs to grab the cucumbers and onions and shove them into the hot jars. Fill up to ¼ inch from the rim and then fill the rest with juice from the pot. Once all your jars are filled, wipe off the rims very well and use the tongs to grab the boiling disk part of your lids and place them on the jars. Then you can screw on the rings.

Once your jars are all sealed up you are ready to give them a hot water bath. This is how you seal them for storage. You can use the same pot you made the pickles in by just rinceing it out well real fast and filling it with hot tap water. Make sure the water is hot because the jars are and it can bust the glass changing temperatures too quickly.

Next you will want to put your old hand towel or pot holders on the bottom of the pot with hot water to make a barrier between the burner and the jars. Once the pot is on the stove, arrange the jars so they are not touching each other (they can touch the sides of the pot). Make sure when you put them in that the water is up to the lids. Bring the pot to a boil on medium heat for 10 minutes. 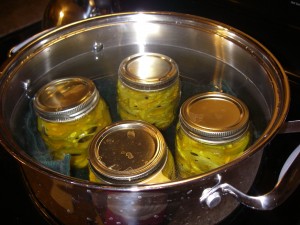 Then you will have to carefully remove the jars out of the boiling water to cool. I used my huge tongs for barbequing that can handle the weight of the full jars. Be extremely careful because you can really burn yourself doing this.

Cool the jars overnight in a place without drafts and then put one in the refrigerator for yourself! Don't be alarmed as you will hear the lids popping as they seal.

These pickles are great on sandwiches or as a snack. Also they make great gifts! I hope you enjoy them as much and I do!

Impress Your Neighbors with some Homegrown Zucchini ...